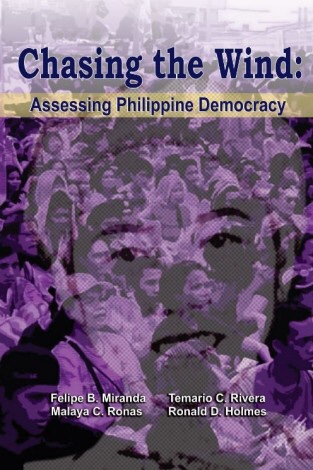 This book assesses democracy in the Philippines for the past 25 years, mapping the deficits and gains since 1986 within the framework of basic human rights and equitable development. It provides a critical, yet fair evaluation of Philippine democracy today and suggestions for strengthening it.

This post contain affiliate links. As an Amazon Associate I earn from qualifying purchases. There is no additional cost to you.

No need to get into all that.

References on Democracy, Politics, and Corruption

First Malayan Republic: The Story of the Philippines

The Moro War: How America Battled a Muslim Insurgency in the Philippine Jungle, 1902-1913

Pork and other perks: Corruption & governance in the Philippines

InSpecIT Inc. was incorporated July of 2008. We are more than six (6) years in actual operation with a very dynamic and aggressive team doing Electrical, Instrumentation, Electro-Mechanical, Automation and Control System Integration and Design Works. We do turnkey projects for Marine, Industrial and Commercial Market.

We provide a fully trained technical staff experienced in troubleshooting in all Marine, Electrical, Instrumentation, Electro-Mechanical and Industrial Control Systems. We provide Engineering Support that can increase efficiency and longevity of a full range of control systems including PLC, SCADA, DCS hardware and software solutions with HMI Displays and Pneumatic and Hydraulic Process Control Systems.

We specialize in Marine Control Instruments Calibration and Power Systems. We are a Panel Builder providing Supply, Installation, Testing and Commissioning of Motor Controls, ATS, Synchronizing Panels, Load Sharing and Load Shedding Controls, Switchgears and all other Electrical Automation.

For more than thirty (30) years of Industry Experience by the Founder and Co-Founders of InSpecIT Inc., our commitment is to continue sharing our capabilities, services and expertise in the Field of Electrical, Instrumentation, Electro-Mechanical,  Automation and Control System Integration to our existing and valued clients and all our future clients whom will put their trust and confidence to us in solving all their technical concerns which is mutually beneficial to both our client and InSpecIT Inc.

For inquiries and request for quotation (RFQ), email gregoriojess@yahoo.com

In the late ’90s, Michael Kremer, then an economics professor at MIT, was in Kenya working on an NGO project that distributed textbooks to schools in poor rural districts. Around that time, the ratio of children to textbooks in Kenya was 17 to 1. The intervention seemed obvious: Poor villages need textbooks, rich donors have the money to buy them. All we have to do is link them up.

But in the early stages of the project, Kremer convinced the researchers to do it differently. He wanted to know whether giving kids textbooks actually made them better students. So instead of handing out books and making a simple before-and-after comparison, he designed the project like a pharmaceutical trial. He split the schools into groups, gave some of them the “treatment” (i.e., textbooks) and the others nothing. Then he tested everyone, not just the kids who got the books but also the kids who didn’t, to see if his intervention had any effect.

It didn’t. The trial took four years, but it was conclusive: Some of the kids improved academically over that time and some got worse, but the treatment group wasn’t any better off than the control.

Then Kremer tried something else. Maybe the kids weren’t struggling in school because of what was going on in the classroom, but because of what was going on outside of it. So again, Kremer split the schools into groups and spent three years testing and measuring them. This time, the treatment was an actual treatment—medication to eradicate stomach worms. Worm infections affect up to 600 million children around the world, sapping their nutrition and causing, among other things, anemia, stomachaches, and stunting.

Once more, the results were conclusive: The deworming pills made the kids noticeably better off. Absence rates fell by 25 percent, the kids got taller, even their friends and families got healthier. By interrupting the chain of infection, the treatments had reduced worm infections in entire villages. Even more striking, when they tested the same kids nearly a decade later, they had more education and earned higher salaries. The female participants were less likely to be employed in domestic services.

And compared with Kremer’s first trial, deworming was a bargain. Textbooks cost $2 to $3 each. Deworming pills were as little as 49 cents. When Kremer calculated the kids’ bump in lifetime wages compared with the cost of treatment, it was a 60-to-1 ratio.

This is perfect TED Talk stuff: Conventional wisdom called into question, rigorous science triumphing over dogma. As word of Kremer’s study spread, he became part of a growing movement within international development to subject its assumptions to randomized controlled trials.

Dozens of books and articles (and yes, TED Talks) have tracked the rise of the randomistas, as they’ve come to be called. The most prominent of these, and the most fun to read, is Poor Economics, sort of the Principia Mathematica of “obvious” development interventions tested and found wanting.

If someone is chronically malnourished, to pick just one example, you should give them some food, right? Duflo and Banerjee describe dozens of projects finding that, when you subsidize or give away food to poor people, they don’t actually eat more. Instead, they just replace boring foods with more interesting ones and remain, in the statistics at least, “malnourished.”
In Udaipur, India, a survey found that poor people had enough money to increase their food spending by as much as 30 percent, but they chose to spend it on alcohol, tobacco, and festivals instead. Duflo and Banerjee interviewed an out-of-work Indonesian agricultural worker who had been under the food-poverty line for years, but had a TV in his house.
You don’t need a Ph.D. to understand the underlying dynamic here: Cheap food is boring. In many developing countries, Duflo and Banerjee found that even the poorest people could afford more than 2,000 calories of staple foods every day. But given the choice between the fourth bowl of rice in one day and the first cigarette, many people opt for the latter.
Even in countries where development projects worked, where poor people went from hungry to nourished, they weren’t more likely to get a job or make significantly more money. All the appealing metaphors of NGO websites and academo-best-sellers—“the poverty trap,” “the ladder of development”—go limp under the magnifying glass of actually being tested.

This post contain affiliate links. As an Amazon Associate I earn from qualifying purchases. There is no additional cost to you.

No need to get into all that.

How To Start A Side-Business THIS Weekend With Little To NO Money!: 19 side-business ideas you can afford to start in just a few days.

How to be a Social Entrepreneur: Make Money and Change the World by Robert Ashton (2010-11-24)

How to be a Social Entrepreneur by Ashton, Robert (2010) Paperback

The Rise of The Entrepreneur: Welcome to the Hive (1st Edition)

We all want food security.  The Philippines is blessed with climate and land resources for rice and corn farming.  When given additional professionalization and mechanization, empowered by the private sector and supported by the government for long term and sustainable development, it will create provincial self sufficiency in just a year.  Here is an idea of a  program for rice or corn farming that will combine private sectors business money with grass root provincial farmers will create opportunities for rapid development.

The private sector investment to give production loans, modern farm machinery and equipment leasing, state-of-the-art dryers/rice mill/post harvest facility/seed processing center project loans, a sovereign guarantee to secure such developmental loan, an allotment of land for such a pilot development and a waiting domestic or international market for farm rice or corn products- these are the key ingredients of a pilot program that when proven successful can be replicated on every provinces.

The government may not  be able to afford to allocate such great funds on localized project.  The cost would be too high for our provincial agricultural development budget.  Ownership is also a question.  Development can stop abruptly or may continue in another direction after each change in administration.  These are all detrimental to our lowly Filipino farmers who actually stagnate and grow old waiting for that one great working chance.  Desperate and hopeless farmers pawn their family inherited farmlands in the absence of such support system.  The average age of farmers in some provinces rose up to 65 of age.  The newer, younger, able generation does not want to be farmers anymore.

Government development programs for rice or corn farming are mostly designed for small farmers and cooperatives. The general sentiment for it is slow and incomplete.  The observed development is dragging and the program wanting more financial support or technology.  A respite to a certain local challenge is being addressed but the total solution far from it.  Everything is a problem of right funding.

But for those farmers in Isabela who professionalized farming by infusing capital money and investing money in their own modern farming contraption, rice farming is at par with popular cash crops in the country, maybe more in profitability. So it is not rice farming but the money and technology in rice farming that is being missed by our grass root farmers.  Given the chance to professionalize their ranks, have an investor to provide finances, and have the opportunity to get their hands on modern day rice farming machines, add the corporate management discipline of having all the land owners own their own company and steer it to whatever heights in rice production business (or corn), then our grass root farmers will have that sought after farming leverage.

We have thought of that.   We conceptualize a program that could be implemented on a provincial level.  A farming  program that is carefully prepared, with specially packaged agreement between guarantors/investors/technology providers, and a market agreeing to buy all farm produce.  It is ready to be implemented and started for any interested province.  For a 2,000 Hectares contiguous rice land of a particular province for example, it will have their own modern rice mill (around 10T/Hr capacity), 8 modern dryers, 1 seed processing center, leased modern land preparation machines like rotavators and tillers, leased modern combine harvesters, and maybe- a husk fired power plant of their own.